MAKLab, Glasgow’s centre for digital fabrication are making a big step into the world of open source architectural design. This week, the team are tasked with putting together a Wikihouse – a plywood, CNC-cut structure – in just a few days, to be exhibited on Glasgow’s busiest shopping street this Wednesday and Thursday. To the uninitiated, Wikihouse is a website where design information for a range of small, prototypical structures is hosted. Users can download the files for each of these designs and use modern digital fabrication tools (primarily a CNC router) to create parts, which can then be put together on-site. Wikihouse themselves describe it best. The designs are shared using a Creative Commons license, ensuring that their use is free to all. Users are encouraged to test the designs and submit changes, adding to an iterative process of development towards the organisations eventual aim, a fully inhabitable house. 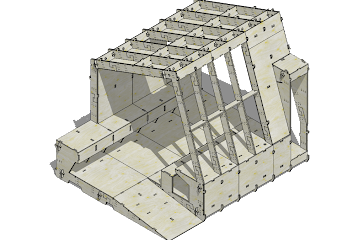 A Sketchup render of the Gwangju Prototype

For MAKLab, the plan is fairly straightforward. The team have downloaded the cutting templates for the Wikihouse Model No. 26001, also known as the Gwangju Prototype. The design was previously constructed for the Gwangju Design Biennale in September 2011 (a few photos can be found here). Since Friday, the CNC router has been working overtime, cutting dozens of sheets of 18mm plywood. The team and volunteers have until Wednesday morning to figure out this rather large, three dimensional jigsaw puzzle, before final assembly, when it will be dropped onto Buchanan Street, by the entrance to Mitchell Lane, as an example of MAKLab’s work to the passing public. Of course, while it might be a straightforward plan, it’s also one that is very ambitious. Day one of the build proper involved sanding off the rough edges of the cut sheets and arranging each of the parts for a test-run of a few of portal frames in the workshop. When the sheets come off the CNC router the plywood tends to be a bit splintered, and as the construction process calls for a lot of hands on lifting, the volunteers were tasked with giving every part a once-over with sandpaper. The process is vital, if laborious.

One of Wikihouse’s aims is to lower the barriers to access to architectural design. Each structure is designed to be as straightforward to put together as possible, avoiding highly technical construction methods. Something akin to flat-pack furniture design, all of the parts can be fitted together and pegged in place. The bulk of the construction will take place in the Lighthouse’s delivery yard over the next day or so, before the whole thing can be lifted around the corner for its final exhibition.

I will be helping out in the workshop for the rest of the week, and will be taking plenty of photos and videos to help document the event. I’ll be tweeting on my own account – @dncnbn – and will also be keeping MAKLab’s own twitter feed updated on events. Each evening I will add to a Flickr set of photos and will upload a few videos to a Youtube playlist. I’ve also been experimenting with Vine as a quick fire way to give a video impression of the fabrication process, so the storify below is a record of some of the live blogging from the day. The hashtag #MAKLabWikiHouse will hopefully be the place to follow developments.

My name is Duncan Bain and I'm an MPhil of Architecture at the University of Edinburgh. My research explores the potential of open source ideas and their application in the field of architecture.

You can read and comment on my growing draft dissertation, in wiki form, here.